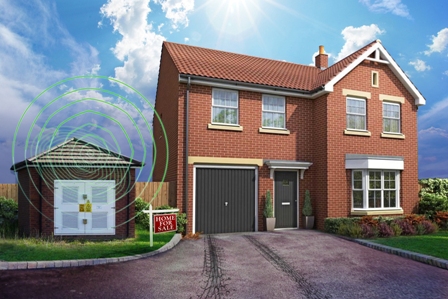 Electric and magnetic fields (EMF) are usually present everywhere electricity flows, from the inside to the outside of your home. All electronic devices produce them in your homes, including refrigerators, TVs, and mobile phones. Furthermore, they are also emitted by power lines or a substation. Although both the electric and magnetic fields are always mentioned together, they are two separate entities.

The electric fields from distribution lines have a minimal variance because of the transmission line’s stable voltage and can easily be shielded naturally by trees, fences, and buildings. Further, the roofs and walls of your home help reduce the electric field strength.

Magnetic fields are usually produced by electric current, meaning they are emitted when electricity flows. Therefore, they are produced when your electrical appliances are running, and they increase with the rise in the current. More so, magnetic fields can bypass most objects and are not easily shielded. However, it’s essential to note that both the magnetic and electric fields decrease significantly as the distance from the source increases.

EMFs from overhead power lines
Magnetic fields produced by everyday appliances can be at times higher than those emitted by the power lines. The magnetic field varies with the amount of electricity being consumed at a given time, the wiring configuration, the current flowing through the line, and your distance from the line. The standard alternating current (AC) is around 60HZ, meaning the current makes cycles sixty times per second, therefore making them produce extremely low frequency.

Power lines produce EMF waves with lower frequency than the waves produced by microwaves or radio waves. Similarly, the EMR from power lines is still of low frequency and is usually found near the power line. As the current flows along the power line, it produces a magnetic field known as an electromagnetic field. Therefore, the electromagnetic field strength is proportional to the current flowing in the wire and reduces as you move away. Those with great concern regarding the health hazards posed by EMFs should ensure they maintain a considerable distance from the source and minimize the time they are near it. In doing so, it will significantly reduce the exposure.

Is there any health risk to living near overhead power lines?
The debate for whether living near overhead power lines or an Electricity pylon is dangerous to human health was raised in 1979 in a study that linked the increased risk of childhood leukemia to the proximity to power lines. The study declared there was the possibility of the power lines causing childhood leukemia for those living near the lines though there was insufficient evidence. However, experts and power companies refuted those claims. The World Health Organization decided to look into the findings and safely noted that they found no significant health issues in connection to the levels exposed to the public.

Therefore, if you’re wondering whether it’s safe to live near high voltage Electricity pylon – there isn’t strong evidence to back up cancer claims in connection to the power line proximity. Although the power lines emit the low-frequency EMFs, there is still no explanation on how the EMFs can cause leukemia.

When it comes to understanding the health effects of living near a Substation or an Electricity pylon, decades of study have yet to provide a definite correlation for any biological cause associated with the proximity. As your distance increases further, about 100 meters from the electricity pylons and overhead wires, both voltage and magnetic field strength decrease drastically.

How far should I live from overhead power lines?
Under the current UK laws, it’s recommended that you maintain a distance of at least fifty meters from power lines since any less than that is considered a safety risk. Surveyors’ reports should clearly show power lines, electricity pylons, or a Substation for residential property so that you can be aware of where to put up your home.

In conclusion, the National Radiological Protection Board, the UK government body tasked to monitor radiation levels, discounted the theory linking power lines and electricity pylons proximity to cancer and said that from the evidence, the electric and magnetic fields produced by power lines don’t affect human health.